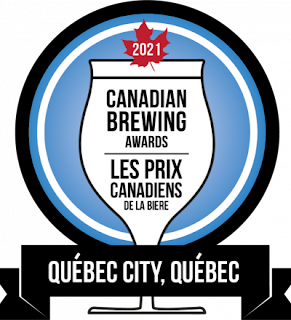 The 2021 Canadian Brewing Awards took place in Quebec City on September 18th and 165 awards were handed out. Maritime breweries collected 14 awards, with 4 each going to Nova Scotia and Prince Edward Island and 6 to New Brunswick. The hardware brought home was by mainstays and newcomers. A full list can be found here and the Maritime winners are listed below.

The lone Gold for N.B. was for the multi-award winner  Barram from Brasseux d'la Cote for Wheat Beer - North American Style.

In the Sweet Stout or Cream Stout category Deja Moo! earned a Silver for Garrison Brewing.

(Lunenburg, NS) - Saltbox Brewery has been approved to make and distribute an official  commemorative ale to mark the 100th anniversary of the launch of the historic schooner.
“We are delighted to work in conjunction with the Bluenose 100 Committee”. said Andrew Tanner, Founding Partner and Vice President of Marketing for Saltbox. “Our Brewery is known for it’s strong commitment to local lore and community outreach and we can think of nothing more exciting for us than to be part of this celebration of excellence”.
Current plans are to have the commemorative cans available to the public by late March.
Tanner also said that negotiations are well advanced to have the cans in the NSLC this summer and Saltbox would be supplementing this effort with distribution of it’s own. In keeping with its’ long-standing practice of financial support for local endeavours, Tanner said that a portion of the sale proceeds will be donated to the Bluenose Heritage Trust. Previously, Saltbox has used its Lumberjack Ale to support the Junior Hockey team, its Dory Racer to support International Dory Racing, and recently donated to the fund-raising efforts at Health Services Foundation of the South Shore using proceeds from its Essential IPA. This spring it plans a co-brew with a portion of the proceeds going to Bluenose Coastal Action Foundation.

Nicknamed the Queen of the North Atlantic, Bluenose rose to global fame as undefeated champion of the international fishermen’s races. The age of sail was well past when Bluenose was sold to the West Indies Trading Company and then wrecked off the coast of Haiti in 1946. In 1937 artist Emanuel Hahn’s sculptured profile of the ship was stamped on the Canadian dime and the ship still decorates that coin today.
Posted by Maritime Beer Report at 11:20 AM

(Dartmouth, NS) - Nine Locks Campfire NEIPA (6.5% ABV and 40 IBU) has just about all the hops they could muster. Cloudy, golden and bursting with flavours of passion fruit, apricot, mango and red apple… with a counterpoint of zesty citrus. Campfire NEIPA delivers rich, pallet-filling body followed by a malty, sweet finish. 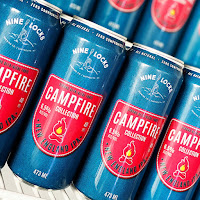 The Campfire Series will have seven releases that will each be a different style of beer. The releases will be super limited batches, sold in retail store only. Nine Locks is using them to test new products and push the boundaries of what they have previously brewed. They’ll be released throughout 2021. The brewer will be keeping an eye of feedback and any that perform exceptionally will be brought back as a seasonal or permanent listing.

The idea of Nine Locks was conceived fireside and this series name is a nod to their history as well as a way to connect the brand back to the outdoors which brand promoted. The can design is new for this series and is a nod to camp patches we collected as youth.

Posted by Maritime Beer Report at 10:20 AM