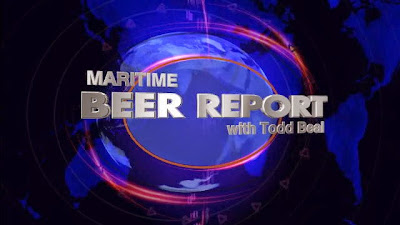 Welcome to the December 11th edition on the Beer Report.

Barnone Brewing had on tap last night Pale, IPA and Big O. All those on tap and 'Vaca Loca' Milk stout were in growlers. The Big O is an all new PEI Organic beer. 100% organic Malt. Light in Color, 5% ABV. Low on bitter side, with a pleasant aromatic nose.

Les Brasseurs du Petit-Sault released their authentic Tripel, named in honour of New Brunswicks's most notorious bootlegger, Maxime Albert of St-Hilaire! A complex beer that explodes with flavours and a boozie 9.2% ABV. Next Saturday, December 19th at the Resto-Bar Le Deck they're taking over the taps, with a few surprises. On the 10 taps look for Oaked Strong Scotch Ale, Strawberry Blonde, Rye Saison and Triple Chocolate Chili Stout.

First City Brewery say it's first kegs are officially listed with ANBL. Their first batch of IPA is currently on tap at the R-Bar and a keg to be delivered to Peppers Pub. The IPA is light in color but big on flavor. It comes it at 6.5% ABV and is brewed using Magnum, Amarillo, Centenntial, Citra and Galaxy hops. Congratulations guys.

Grimross Brewing released Dubbel Noel which is higher ABV at 8.6% and was conditioned on vanilla beans for 2 weeks - rich caramel, raisins, dark chocolate. Out now and at the growler fill stations in 2 weeks.

The Pump House Brewery has Nor'easter Beater Winter Warmer back on tap. It is a traditional malty-sweet English style that is brewed in the winter months and spiced with cloves, nutmeg and cinnamon. Deep dark amber coloured with a big malt presence and lingering spicy notes with a 7.0% ABV.

Trail Way Brewing has gone to the dogs again. Their dog Aura is a 2 year old unknown mix of breeds and was rescued from the Fredericton SPCA this past summer – she’s settling into her new home great and happens to be a 65 lb lap-dog.
Now meet, “Good Aura”, the beer. Similar to Aura the dog, “Good Aura” is a bit of a hybrid of styles. Good Aura is brewed with rye, munich and crystal malts resulting in a 7.1% ABV amber-coloured ale, but with plenty of hop flavour and aroma and slight hop bitterness to balance the malt. Each time Good Aura is brewed a donation will be made to the Fredericton SPCA, so when you’re enjoying this beer, know that you are supporting the SPCA and a good cause.

Garrison Brewing is adding an 11th beer on tap at the brewery, Pear Hug Weisse. It is a 5.2% ABV flavoured weizen. It is made with pear juice which gives it a fruitiness and sweetness. They also say it is extremely smooth and aromatic. This is on tap now at the brewery along with Spruce Beer, Winter Warmer, Imperial IPA, Risin’ Stein Weissen, Martello Stout and their 5 full time beer!

The George's Island Brewing over at the The Auction House released the names of their first two beer and they had a bit of fun with them. First up is Her Name was Amber, this is an amber beer made from New Zealand malts and is slightly hoppy beer with hints of citrus and a touch of bitterness. Next up is Bob's Your Dunkel, this is a Dunkelweizen (German wheat beer). It is brewed with chai tea giving it a cinnamon/nutmeg flavor.

Good Robot Brewing is drawing ever closer to its tap room opening and have announced some changes to the beer line-up. The steam and corn beer are going off tap for a while so stock up. Look for experimental, guest brews and one offs coming soon including:
- Coffee Pale Ale v. 2.0
- Märzen
- Smoked Molasses Porter
- Session IPA

North Brewing says to look for their seasonal Milk Stout in January as they have been busy on a couple of projects. One of those projects is Battery Park in Dartmouth which opened yesterday at the former Nectar location. It has a North outlet store, 16 taps of a variety of Nova Scotia Craft Beers and a texture and flavor inspired small plate menu.
They also have Glenora Barrel Aged Strong Dark Belgian available again. Grab some today at the Halifax or Dartmouth locations while it lasts.

Sea Level Brewing's Wee Heavy Scotch Ale is now available in cans and will be available in growlers by the weekend.

Spindrift Brewing Company has added Saturday to its opening schedule swinging the doors open from Noon to 4 PM at 21 Frazee Avenue in Burnside. They also hit the shelves at the NLC recently and will be in NB at the ANBL in January.

Unfiltered Brewing now have their taproom open next the brewery on North Street. It is called "Charm School" is open from 4 PM until midnight, closed Monday.

Bulwark Ciders now has bottles of its oak-aged cider, Cuvée Spéciale on shelves in the NSLC. It comes in a 750 ml flip-top and is 7% ABV.

Have a great week end and as always enjoy responsibly.
Posted by Maritime Beer Report at 8:14 PM