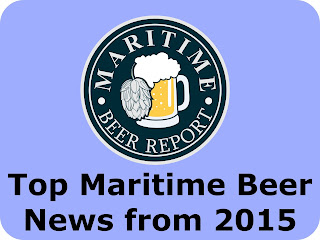 If I had to sum up 2015 in a few words for the Maritime Craft Beer scene it would have to be growth, expansion, collaborations and tap rooms. Growth was at a rapid pace as seven new breweries opened in Nova Scotia, eight in New Brunswick and one in Prince Edward Island. The growth was not without a couple of losses with one closure in each of New Brunswick and Nova Scotia.

As far as expansions and collaborations the list of who did not is much shorter with over 20 maritime breweries participating in collaborations and many more increasing their capacity.

The ANBL growler station program was a resounding success serving over 80,000 litres in its first year and growlers moved in to all four private stores in the Halifax area.

All the beer festivals were stronger than ever with the exception of Brewers Bash which was on hiatus this year and Nova Scotia launched its inaugural Craft Beer Week.

Now for some details.

In May we saw Upstreet Craft Brewing open in Charlottetown, Good Robot Brewing in Halifax and Distillerie Fils du Roy get the go ahead to sell its suds. Upstreet has been very successful with its brewery and tap room and released its beer in bottles as well. Good Robot has also done very well joining the craft culture in Metro and opening a large tap room at its brewery in December. Distillerie Fils du Roy was held up a few months from selling its first beer due to regulatory issues.

As we rolled into summer in June three breweries opened their doors. Breton Brewing on Cape Breton Island was welcomed warmly and had many visits to its brewery and tap room in the Sydney area. Up in Shediac Flying Boats Brewing took off with its homage to local history and a very succesful opening at Markie's in September. Finally the beer oasis in Truro that is The Nook & Cranny starting selling its own beer brewed in house on a Smart Brew system.

Things heated up in July with the addition of Unfiltered Brewing, Half Cut Brewing and Savoie's Brewhouse. Greg Nash and his partners brought his hop-forward brews to the brewery rich north end of Halifax. Unfiltered opened their tap room in December called Charm School. Half Cut is the latest incubation project at Picaroons on Queen Street in Fredericton following the very successful Grimross Brewing. Savoie's Brewhouse opened their nanobrewery in Charlo New Brunswick making it the most northerly brewery in the picture province.

As we finished summer and reached September Spindrift Brewing and Firkinstein Brewing swung open their taps. These breweries were both producing one beer but were on opposite ends of the spectrum. Spindrift opened a large ultra modern brewhouse in Dartmouth while Firkinstein cobbled a 1000 l brewhouse from gear put together in their words "like frankenstein".

In the last quarter the race to open in 2015 was on and and five breweries answered the call. River Valley Micro started brewing in the Woodstock area in October using Railcar Brewing's gear. First City Brewing opened in Saint John, Johnny Jack's Brewery began making beers in Oromocto, Maybee Brewing squeaked in opening at the end of December in Fredericton and lastly George's Island Brewing opened in downtown Halifax.

All the growth in 2015 didn't come with out a couple of losses. The beloved brewpub Rogues Roost in Halifax closed its doors but parent company PEI Brewing released their IPA in cans so the name lives on. Shiretown Brewing in Charlo also closed this year.

The second annual Atlantic Canadian Beer Awards were held in October in Halifax. Over 200 entries from twenty-one breweries and cideries shared the 40 medals awarded in 14 categories as well as three special awards. Garrison Brewing was the big winner of the night taking three gold and one silver medal as well as Brewery of the Year. Another notable item was Les Brasseurs du Petit-Sault swept the entire Belgian Style Specialty Ales category taking all three medals. The two new cider catergories were were dominated by Cider House and Red Rover Craft Cider who also took Cidery of the Year. Lastly, the coveted Beer of the Year or "Best of Show" went to Box Cutter IPA from Bad Apple Brewhouse. (Full results here )


The inaugral Nova Scotia Craft Beer Week happened in May this year and will be returning in 2016.

Garrison Brewing Company completed its new brewery and had a huge party in the backlot with headliner USS.

Picaroons Traditional Ales cancelled the Brewers Bash this year but vows to return in 2016.

Stillwell's Beer Garden opened on the Halifax waterfont and was loved by beer fans and by all accounts a huge success.

Rare Bird Craft Beer was busy this year constructing their $8 million brewing and distilling project at Osprey Shores Golf Resort. When finished it will be one of the largest craft breweries in Atlantic Canada.

North Brewing effectively tripled their capacity by moving their old brewing equipment to Battery Park in Dartmouth and getting a new system for their breery on Agricola Street.

Posted by Maritime Beer Report at 2:59 AM